Manulife Bank Select combines a mortgage with a high interest, full feature chequing account to bring your banking together in one convenient product.

With a Manulife Bank Select mortgage you can customize your mortgage to meet your individual needs and preferences.

Enjoy the benefits of splitting your mortgage into as many as five different portions in order to:

With each portion of your mortgage you can choose from a variety of options:

An example of how splitting your Manulife Bank Select mortgage can help save on interest.2

Steve and Melissa have a $250,000 mortgage. They like the low variable mortgage rates that are currently available but they don’t think they’re going to last. They want to take advantage of this low rate now but would like some stability if rates rise. 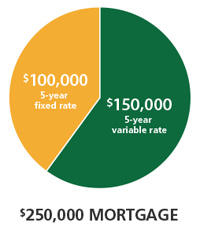 Save money and be mortgage-free sooner with some of the most flexible annual prepayment privileges in Canada. These include:

If you choose to split your mortgage into portions, the prepayment privileges still apply to any and all of the portions.

For closed terms, a prepayment charge would apply for prepayment greater than the privileges noted above.

Enjoy the flexibility of a daily banking account while earning a high rate of interest on every dollar in the account, every day. You can use it to:

1 If the interest charge exceeds the payment, you will be required to increase your payment amount.

Connect with a Mortgage Specialist